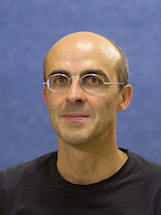 He was born in Trento, Italy, in 1973. He studied physics at the Faculty of Mathematical and Physical Sciences of the University of Trento. He worked as a undergraduate student at the research project "Inertial Effects in Superfluids" of the Department of Low Temperature Physics at the University of Trento partially carried out at the European Facility of Low Temperature Physics at the University of Bayreuth, Germany. In 1998 he graduated in Physics, discussing his master thesis on " A He4 superfluid SQUID prototype working at temperature below 200 mK". In 2004 he obtained his PhD at the Kamerlingh Onnes Laboratorium of the University of Leiden, The Netherlands. His research concerned the development of mechanical transducers and low noise two-stage SQUID amplifiers for the spherical gravitational wave detector MiniGRAIL. He will continue his research in Leiden on a postdoc position. Since August 2005 he works at SRON as instrument scientist to develop the imaging array of Transition Edge Sensor (TES) microcalorimeters and bolometers and the frequency domain multiplexing (FDM) readout for the future X-ray and infrared astronomy missions. He is currently working on the development of superconducting Transition Edge Sensors (TES) array and the Frequency Division Multiplexing read-out for the X-ray Integral Field Unit (X-IFU) on the Athena X-Ray Observatory. He is author and coauthor of more than 80 publications on refereed journals and conference proceedings. Personal webpage: https://personal.sron.nl/~lucianog/